In this blog entry, I would like to talk about the Little Mermaid statue (Danish: Den lille Havfrue) located in Copenhagen, the capital of Denmark.

Copenhagen is a city that draws attention with its architecture. It is possible to see both classical Scandinavian-style architecture and modern architecture in the city.

While many architectural works and sculptures draw attention to the city, one of the most important symbols of the city is the Little Mermaid Statue located in the sea. The statue is located in the port of Langelinie, just outside a beautiful park called Kastellet. The foundation of the statue was laid in 1909, and the statue was unveiled in 1913. This bronze sculpture was made by Edvard Eriksen. Edvard Eriksen built the statue based on his wife.

The inspiration for the statue is the fairy tales of the famous Danish storyteller Hans Christian Andersen. The statue is frequented by tourists going to Copenhagen, a major tourist attraction.

Interestingly, the statue has been vandalized several times. Paint has been spilled many times over different parts of the statue. On one occasion, the statue was beheaded in 1998. In 2020, „Racist Fish“ was written on the stone on which the statue is located. It is really strange that these attacks are happening because the native people of Copenhagen seem quite calm and happy.

If you have been to Copenhagen, it is not recommended to go here without taking a photo. Although, when I talked to many local people, they said that they could not understand why the statue was so famous. Frankly, I agree with them. Copenhagen has many other good things to offer to tourists, for example, delicious food:) 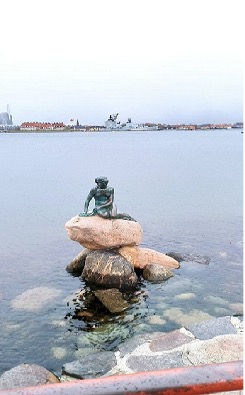