I have been living in Hamburg for about 4 months. I came here from Istanbul, the city where I have lived all my life. Therefore, I wanted to make a short comparison between the two cities.

Essentially, to make such a comparison, it is necessary to write a very long article, but I would like to talk about it briefly.

Firstly, I have to say that Hamburg and Istanbul are two completely different cities. Perhaps the only thing they have in common is that they both have water running through the city.

The Bosphorus against the Elbe River and Alster Lake in Hamburg… Istanbul is a very crowded city, with approximately 20 million people living together with those who have not registered for residence.

About 1.8 million people live in Hamburg. Secondly, I think this population difference is the main reason for the differences between cities.

While traffic is a big problem in Istanbul, it is difficult to say that there is a problem in Hamburg. Many people already use bicycles in Hamburg. (I’m still amazed at how they can ride a bike in cold weather).

In terms of food culture, I have to say that I prefer Istanbul. In my opinion, the preference of those living in Hamburg should be in this direction, because there are dozens of Turkish restaurants in the city.

Life in Hamburg is quite predictable and calm. In Istanbul, on the other hand, it is often more stressful.

One of the biggest differences is that people go home early in Hamburg and there are not many opportunities after 11 o’clock. Istanbul is a city that lives for 24 hours, in other words, Istanbul never sleeps.

Maybe there is much more to write, but I would like to end with a comparison: Living in Hamburg is like watching an art movie. Everything is plain, simple, slow, and predictable.

Living in Istanbul, on the contrary, is like watching an action movie. Everything is exciting, you can’t predict what will happen in the next 5 minutes. Everything is spontaneous. I can say that living in both cities is different but a nice experience. 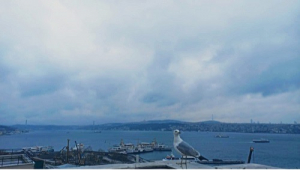